It had to be a huge event. It had to make a huge impression, create the type of wave that would capture all the hearts of Rexburg.

Coach Mark Mocke and the players approached Mayor Jerry Merrill to organize with him. The day of the game, Merrill came and opened with a small speech. This was followed by a flyover of an old war plane, piloted by one of the mayor’s friends.

The two teams lined up as a local cub scout group came and sang the national anthem. The Blister’s BBQ food truck was there. Between 100 and 200 people showed up to watch.

The Rexburg team faced off against the mixed team from Portneuf, Pocatello, and Idaho State University. The mayor and referee conducted the coin toss. Rexburg won it. The teams squared off, Rexburg kicked off, and the game began.

Few spectators had ever seen a rugby game before. And they immediately fell in love. 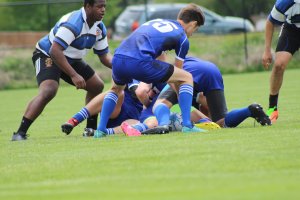 The Rexburg Yeti began a little over a decade ago by a group of avid rugby fans and players, who yearned for a rugby team. Jason Toeava was one of the original players that is still with the team, and until Mark Mocke came into the picture, he was at the same time player, captain, and coach.

“Over the last couple years, with Jason’s hard work, he’s been pushing it and having games,” says Mocke. “A bunch of guys have joined with them to assist in making the team work.”

For Mocke, who has previously coached rugby at the junior league levels, the experience to work with the Yeti has been a first.

“Being a South African, we have a passion for rugby,” says Mocke. “My boys have all played rugby, and when we found ourselves here, my son James was playing with the local Rexburg Yeti club.”

Through James’ involvement, Jason and the other players found out about Mocke and asked if he would like to help coach.

“I’ve never coached rugby before at this level,” Mocke says. “It’s been a wonderful learning curve for me to getting to know the guys and getting to know some coaching do’s and don’t’s.”

The Rexburg Yeti is registered with USA Rugby, but Mocke says that the team has still found that’s it tough to be in the league, having to travel and scrounge up games wherever they can. Also, being based in such a fluid town has made it difficult to have a consistent team.

“They cajole, and plead, and beg with guys to practice and play the game,” says Mocke.

Thankfully, many players otherwise unfamiliar with the sport have been willing to come out, learn the game, and play hard. Many of these players have a background in a seemingly similar sport: football.

Football has a rich tradition in American culture, but in actuality, rugby preceded football as the big sport in America. The U.S. had an Olympic rugby team until 1923 when they stopped competing, after which football came in and filled the void.

But Mocke says that he sees the enthusiasm for rugby coming back in full swing. He cites two facts: that rugby is the fastest-growing team sport in the U.S., and that the U.S. are the world champions in 15-men’s rugby.

“I think when the people of Rexburg start to see rugby games and attend a couple of matches, they’re going to fall in love with rugby,” Mocke predicts. “Because really it’s that type of game.”

Rugby has not only gained popularity, it has, in recent years, had a heavy influence and draw from football. The Seattle Seahawks, for example, have started adopting rugby tackles instead of the traditional football tackle.

“They find the rugby tackle a whole lot more effective than some of the blocks and things that the NFL players normally do,” Mocke says.

There has also been a good transition from football to rugby in various arenas. BYU has seen success with some of the guys who have made that transition, and Mocke sees the same results with the guys who come play for the Rexburg Yeti.

“Once they’re used to it, they’ve got the courage and the determination,” Mocke says. “We’re really impressed with the way that they come into it.”

The future of the Yeti 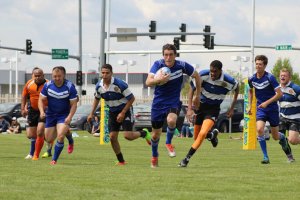 The Saturday that the Rexburg Yeti played the team from Pocatello, May 20, the Yeti came out victorious, 60-5. The main event, however, was the spectacle itself.

“The whole idea was a rugby spectacle, and people came and they enjoyed it,” says Mocke. “They loved it because they just saw the guys running up and down, scoring tries, and that’s what you want to see with your home team.”

Since then, Mocke has moved with his family down to Provo, but the Yeti soldier on. Jason Toeava has taken up some of those old responsibilities again, and the team picks up games whenever they can. You can contact Jason through the Yeti Facebook group to learn about upcoming games, or to come out and play for the team.

“We kind of have this culture of unity,” Mocke says of the team. “We’re a family, we’re one. Rather than ‘Yetis,’ we’re ‘Yeti,’ because we stand as one unit, and that’s what we try to accomplish in our rugby as well. To be one unit of strength rather than a lot of individuals.”