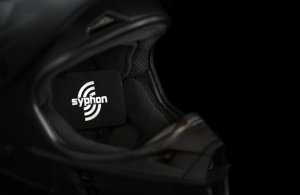 It’s a difficult thing to build a company from the ground up. It’s even harder when you don’t have wholesalers to provide you with the product. Or when you have to convince engineers, the prototyping house, and the manufacturer to stick it out with you.

This is precisely what Kyle Rawson has done with the Rexburg-based company Syphon.

Syphon sells paper-thin, flexible speakers that fit inside helmets. Kyle Rawson, a snowboarder originally, came up with the idea for the action sports industry.

“If you’ve ever tried to stick earbuds in your ear then put a tight helmet over it, it is uncomfortable, to say the least,” says Rawson. “Our product fixes that problem and allows you to listen to music while you ride without having to deal with the pain and the hassle of earbuds.”

Rawson originally began working for a friend in the flexible speaker technology merely for its own merit. It was his idea to bring it into the arena of motorsports and action sports.

“I kind of had the idea to use that technology in the snowboarding space,” Rawson says. “That naturally progressed to other interested parties and sports that wanted to be involved in it.”

A business student, and having been involved in some “side hustles,” Rawson initially submitted his business plan to competitions. At this time, Rawson says he had no intention of actually starting the business.

“It was just something I was interested in and a good way to make some extra cash,” he said.

After submitting to and winning three of these competitions, Rawson decided that this was too good of an idea to let lay dormant.

Being such a niche company and industry, Rawson and his small team at Syphon have faced several challenges to getting going.

“It was a brand new technology that had never been commercialized before, and distributed through a completely new channel of retail,” Rawson says. “Everything was new about it.”

Rawson says that everything from the PVC silicone wrapping around each individual wire to the circuit boards and transformers had to be customized specifically for Syphon’s application.

“Since everything was so customized about our product development process, it was a heck of an endeavor getting it started,” he added.

Without the familiarity of the technology, it took some convincing to fully involve teams in the production development process. It was a matter of showing them the vision, that this would turn into something big in the long run.

Which, of course, it did.

Pain and the Solution

Kyle Rawson believes that every business should be built off a pain and its solution. In the case of Syphon, he says it’s a literal pain and solution.

“Listening to music while you are involved in action sports goes hand-in-hand,” Rawson says. “Our customers want to, have to, listen to music while they ride, and the current solutions just aren’t doing it for them.”

Nowadays, Syphon is creating solutions in the United States, Canada, Australia, New Zealand, and all over Europe. All operating from an office of three people here in Rexburg.

Rawson, a self-proclaimed “small-town person,” is glad that he doesn’t have to go to San Francisco or another big tech town to make Syphon big.

“It’s really cool that I can have the audacity to build a business that is international and still be able to live where I want to live,” he says. “With the technology and timing, I’m really blessed to live in a day and age where that kind of stuff is possible.”