The game is Spikeball, and the time for smashing the competition is almost upon us.

Hosted by the BYU-Idaho Housing and Student Living Office, the Roommate Spikeball Tournament will take place on May 19 at 2:00 p.m.

The tournament will be bracket-style double elimination; all teams will get to play at least 2 games, more if they progress further in the bracket. 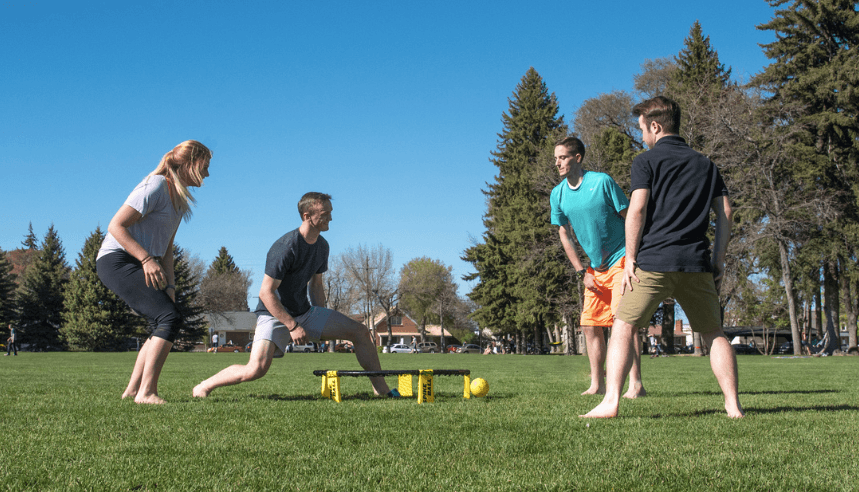 Teams are “roommate only”, meaning you can only compete on a team that includes one of your roommates. Roommates will be verified at check-in.

The tournament requires at least two people to compete, so don’t show up alone. Married students can also compete on a team with their spouse.

“Prizes for the winning teams will include a semester supply of toilet paper (the good kind) and a Pizza Hut gift card,” says Kimberly Youngblood the Outreach Council Event Coordinator. She mercifully emphasizes that the toilet paper will be “the good kind.”

The tournament is open to all BYU-I students but requires registration through IMLeagues or by calling (208) 496-9220. Registration ends May 15.

Spikeball is a miniature-trampoline ball game that rose to popularity after being featured on the critically acclaimed business-themed entrepreneur TV show, Shark Tank.

Explained on the Spikeball website, “The sport of roundnet is played 2 vs 2, with a hula hoop sized Spikeball net placed between the teams. A player starts a point by serving the ball down on the net so it ricochets up at [his/her] opponents. They have up to three hits between them to control the ball and bounce it back off the net. When they miss, you score. First team to 21 wins.”

And the best part is, there are no boundaries. Once the game begins, players can move or hit the ball anywhere.

For newcomers to the sport, the official rules of Spikeball can be found here.