Three of Sugar Salem’s own have achieved some impressive national status in gymnastics. Next week, Ryker Shaw, Zackry Lerwill, and Payton Lerwill will head down to Orlando, Florida to compete in the Junior Olympic National Championships. Explore Rexburg had the opportunity to sit down with these athletes and catch up with them. 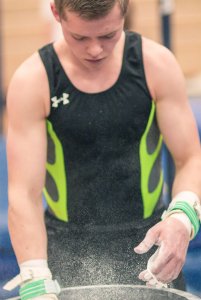 Ryker Shaw, 18, is a senior at Sugar-Salem High School. This is his sixth time competing at the National Championships. A gymnast since the age of six, Ryker is driven to constantly push his boundaries to the next level.

“Honestly, something that’s really driven me is just trying to impress my family as well as my coach,” Ryker says. “And face the challenges that I have and be able to conquer them.”

Being in the sport for so long and with such dedication, Ryker has depended a lot on his family. This has helped him stick with his passion through both good times and bad.

“There was one time where I felt like I wasn’t progressing and I wasn’t getting anything right,” he recalls. “I just blew up one night, and I was like, ‘Mom, I don’t think I can do this anymore.’ But my mom knocked some sense into me. And I knew, ‘Yeah, I want to keep going.’”

Some of Ryker’s favorite athletes are gymnasts, such as Chris Brooks and Stacey Ervin.

“Even when he messed up, he had a positive attitude,” Ryker says of Stacey Ervin. “He just pushed forward. He didn’t let that issue hold him back.”

Zackry Lerwill, 15, is the older of the two brothers that will be heading down to Orlando for the first time. A gymnast since the ripe age of two, Zackry has been entreated to examples and inspiration his whole life.

“I pretty much grew up in the gym,” Zackry says. “So I’ve watched the older guys and they really inspire me because they were nice to me. I just thought, ‘I want to be like them.’”

Olympic gymnasts have also acted as an inspiration for Zackry.

“I like Jonathan Horton,” Zackry says. “From when I was really little, he’s always been doing gymnastics. It was really fun to watch him, especially on the high bar, doing release moves.”

“Just having a dream and a hope that one day I could get to that level was just amazing for me,” he adds. 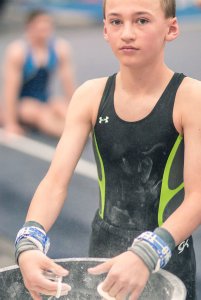 The youngest of the group and younger brother to Zackry, Payton Lerwill, 12, has also been doing gymnastics since the age of 2. Like the other boys, he is dedicated to the sport in a big way, including spending 15 hours a week after school at the gym.

“Watching the Olympics and gymnastics was one of my favorite things as a kid to watch,” Payton recalls. “It was just really interesting to think, ‘I might be able to do that someday.’”

This amount of work and dedication is incredible for anyone. For Payton, it’s a matter of looking forward.

“Sometimes I don’t necessarily want to go to practice,” he admits. “But in the long run, it’s looking to what my long-term goals have been.”

Like his brother, Payton enjoys watching Jonathan Horton on the high bar. He also looks up to gymnast Danell Leyva.