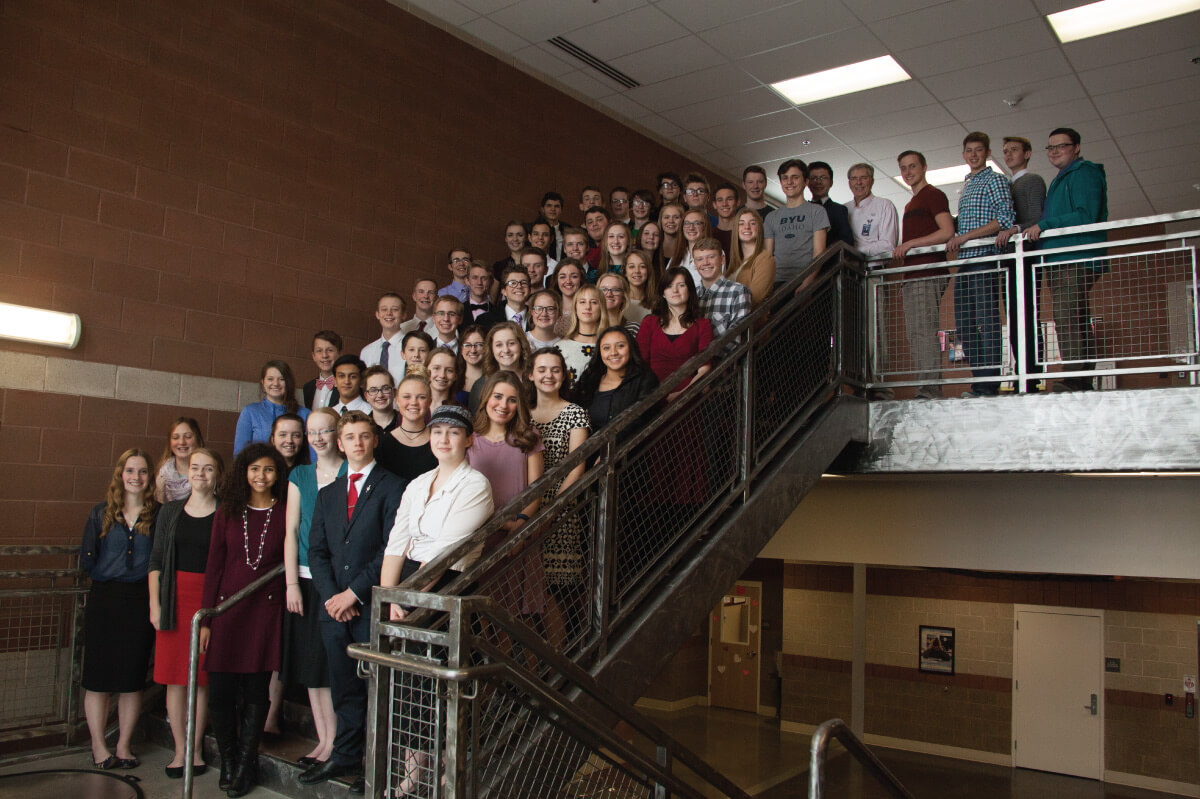 If one were to look around the office of Bruce Benson at Madison High School, they would see walls covered in 25 years’ worth of accolades. Plaques upon plaques stand in recognition of the achievements Benson has made with the Madison Speech and Debate team over the years.

The key to all this success lies in a small spot on the wall, where hangs a poster of John Wooden’s pyramid of success.

“John Wooden never talked to his team about winning, ever,” Bruce Benson told Explore Rexburg. “That was not his goal. His goal was to get the most out of his people.”

The philosophy of the legendary high school and college basketball coach speaks to Benson. It revitalized the way he, as coach of the debate team, would lead his students. And adopting it has led them to numerous state victories.

“He would say, ‘Once you’ve put everything out there, and done your very best, that’s success,’” Benson says. “I adopted that philosophy, and all of a sudden all we do is win all the time.”

When Bruce Benson began as the debate coach, his arsenal was meager. With just one senior, no juniors, a few sophomores (that he was able to convince to join), and a one-year trial granted by the principal, the program was firing on few cylinders.

Despite his father having been a debate teacher at then-Ricks College, this wasn’t Benson’s forte at the time.

“I was the sixth debate teacher in six years,” Benson remembers. “I took industrial arts in college, not debate. In fact, I didn’t know anything about debate.”

Not all the great ones have always known at what they will be great, or that they even will be great. Bruce Benson is walking, breathing proof of this.

“I had a really hard time finding what I wanted to do,” Benson says. “I went [to college] one semester, and I thought, ‘I’ve had enough of this. I’m never doing this again.’ When I came back [from my mission] and got settled down, I decided I was definitely going to go to college.”

Benson ended up becoming a full-time carpenter, but when the economy took a hit in 1979, work was hard to find.

“I’d always toyed with the idea of teaching school,” he said. “It was something I thought about a lot.”

After all the English teachers turned him down, Hemming gave Benson one year to see what he could do with the program. The year was 1992. Now, in 2017, Benson’s “wall of fame” is a testament to what exactly what he was capable of accomplishing.

“I have hundreds of letters from kids telling me thanks,” Benson says. “They say that debate has changed their lives for the better. I get them all the time.”

Bruce Benson’s time with the Madison Debate team may have begun with sparse participation, but this year, 76 students participated. And past students not only keep him up-to-date on their lives, but they have incredible opportunities to report.

Why have his students been so successful?

“When they come in, half of them don’t even look at you, they look at the floor,” Benson says. “And when they’re finished, they can look you in the eye and have a conversation with you. And they can take a stand on either side of the issue and convince you they’re right.”

“The research, the writing, the presenting, and the critical thinking skills far surpass anything else they can do in school,” he adds.

Benson says he loves his job and the kids he teaches there. The time commitment is huge though, and he is sure that most people aren’t aware of the huge amount of time it takes.

“My wife, bless her heart, has sat home for years during the season, because I’m gone,” he says. “I ask her if I can stay at least two more years. And I know it has to come to an end, but I love this job a lot; I love the kids.”

This is about leadership

Bruce Benson was in Birmingham, AL with his team for a National Speech and Debate competition. It was an experience there that revolutionized his mode of coaching.

“I’m a very competitive person,” Benson says. “And I just dwelled on, ‘We’ve got to win. If you do this, we’ll win.’ And all we did was lose. It was really frustrating, because I knew we had really good kids. But I was putting so much pressure on them to win, that when they were unsuccessful, they just kind of lost enthusiasm.”

Benson picked up John Wooden’s Pyramid for Success: Building Blocks for a Better Life at the tournament and thumbed through it.

“All of a sudden, I’m going, ‘This is not about basketball,’” Benson recalls. “This is about leadership.”

The book had such an impact on Benson, that he bought fourteen copies and handed one out to each of his captains. It changed the entire dynamic of the program. To this day, he has them read and study the book over the summer to prepare for the season.

“Focus on doing your best, and be prepared,” Benson tells his students. “You walk in that room, you debate, and when you walk out and say, ‘I’ve done the very best I can do, I’ve prepared, and whatever happens, happens,’ you’re still successful.”