MWI began in 1999 in Utah but has developed and grown into one of the biggest global digital marketing companies. It not only has locations in Salt Lake City, Utah and Mesa, Arizona but has expanded into Hong Kong and Singapore.

Despite these Asian markets being an incredible opportunity for growth, with as little as three competitors in Hong Kong compared to Utah’s hundreds, the decision to expand over there was not initially business-related.

“My wife and I decided a few years ago to adopt an older child from China,” says Josh Steimle, founder and CEO of MWI. “We’re still working on that adoption, but we moved over there and it turned out to be great for business as well.”

By moving to China to ease the transition of the adopted child, Josh displays two of the qualities that make him successful: an understanding of and care for his audience, and a tendency to turn a process on its head and derive success from it.

The MWI landing page to their website displays their slogan: “Ambition meets strategy.” If you ask Josh, he would more simply describe it as “we sell stuff.”

“We help companies do their marketing,” Steimle further explains. “We do SEO, we do websites, we do paid search, social, content strategy, all that. And really when you boil it down, we help great companies to sell more stuff.”

The opportunities in China have appeared to be endless as well, and have become very fruitful. MWI is currently working on how they can expand onto that open playing field by opening new offices and, a challenge for any company, recruiting capable talent.

“There’s just so much opportunity there,” Steimle emphasizes.

Josh and his seven-year-old son came into Rexburg for the Power to Become (P2B) Conference, which was held on Friday, May 19th. A decorated speaker and writer on digital marketing and entrepreneurship, this was just another arena in which Steimle showcased his expertise.

Steimle began writing for Forbes magazine based on a connection, a friend, who wrote for them.

“At first I just covered entrepreneurship and kind of talked about my experiences,” Steimle says. “That was fun. I got good feedback on the articles I was writing there.”

As he moved more into covering digital marketing, however, that’s when it really began to positively affect his business.

“As I wrote about what we did and I shared secrets and gave out tips on digital marketing, people would find that content,” Steimle adds. “Then they would come to our agency and hire us.”

This has been a major component for the growth that MWI has seen over the past three years at the agency. Steimle has been able to “share his secrets” with not just Forbes, but Mashable, TechCrunch, and more.

Steimle says that his business has changed his life, providing unprecedented opportunities. Besides speaking engagements like the P2B, he received a book deal and published Chief Marketing Officers At Work in 2016.

“It’s kind of a fly on the wall perspective of what it’s like to be the top marketer at one of these companies,” says Steimle, who interviewed 30 CMOs from big companies like PayPal, Spotify, Home Depot, and Target, for the book.

Among many topics in the book, Steimle addresses the issue of companies developing brand loyalty.

“In this day and age, people don’t trust brands so much,” Steimle told Explore Rexburg. “People are asking, ‘What have you done for me today? If you as a company have not served me today, and somebody else comes along with a better offer, I’m going to switch.’”

As we as consumers care more about functionality and a better value, Steimle says, companies are forced “to deliver the best value today, tomorrow, and always.” He adds that this is good.

“Companies have to really hustle,” Steimle says. “And we as consumers benefit with better products and better services.” 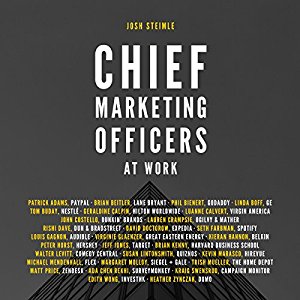 As with many accomplished entrepreneurs, Josh Steimle didn’t always see the success that he sees today. He tells of, in the beginning, one hundred hour work weeks, sleeping on the floor of his office, and skipping out or early on family events.

“After seven years of that, my business wasn’t doing well,” Steimle says. “I was not doing well personally, or emotionally. Stress levels were crazy, and financially, it was just a disaster for me.”

In 2007, Steimle knew that he needed a change. He knew he needed to set what he calls “artificial boundaries,” or personal and professional limits to keep it all together.

“I decided, this isn’t working,” Steimle remembers. “I’m going to die if I keep doing this.”

Steimle decided to cut back. He wouldn’t work more than 40 hours a week, he encouraged his wife to quit the job that she hated, and they even set specific times to wake up and go to bed.

“Once I did that, I started making better decisions,” Steimle says. “Within two months, I was paying off debt instead of getting into debt. I was getting a salary, my wife didn’t have to work at the job she hated, and everything had turned around.”

Steimle now is a big proponent of setting artificial boundaries or constraints. He saw that limiting himself helped change the decisions he made out business and that all aspects of his life — his physical health, his marriage — improved.

In both his personal and professional life, Josh Steimle has seen that by turning things around, by taking a leap of faith, things have worked out better for him and his business.

He owes much of this to the idea of “profit first,” which he learned in the book of the same name by Mike Michalowicz. Most businesses run on the idea of making money, take care of your expenses, and then whatever is left over is your profit.

“[Michalowicz] switches that around,” Steimle says. “Take out your profit first. Whatever is left over, is your operating expenses.”

As Steimle has adopted this model with MWI, he says that it has changed everything in terms of financial order, profitability, and having money when they need it.

“This comes back to those artificial restraints,” Steimle says. “This ‘setting boundaries first’ and then operating within those boundaries. I think it’s key to prospering as an entrepreneur.”

Josh Steimle’s personal and business philosophies have changed his life and allowed him to have an incredible, positive influence on others as well as digital marketing and entrepreneurship. His ability to see opportunity and turn traditional models on their head has allowed him to become a successful entrepreneur and trusted source of wisdom.