Rexburg drivers beware! Rexburg is full of potholes waiting to wreck your car. Almost anywhere you go or any route you take you’ll see a pothole. Potholes can do some serious damage to your car. The damage your car sustains will depend on the depth of the pothole, as well as the speed on impact. A pothole can do damage to your tire, rim, suspension, and much more.

Regardless of how much or what type of damage your car takes, you’ll likely have to spend money you don’t have. How can you afford to pay for damage to your car when you can barely afford to pay for food? You’re already on that McDonald’s dollar menu budget!

We want to help you avoid having to pay for any unforeseen car damages. To help you be aware of places to avoid while you’re driving, we’ve compiled the 10 worst potholes in Rexburg into a tidy list. If you have to take these streets to get to your next location, at least get off your phone and pay attention to the road! Read through our list and make sure you know these spots before you go out and face the rough roads of Rexburg. 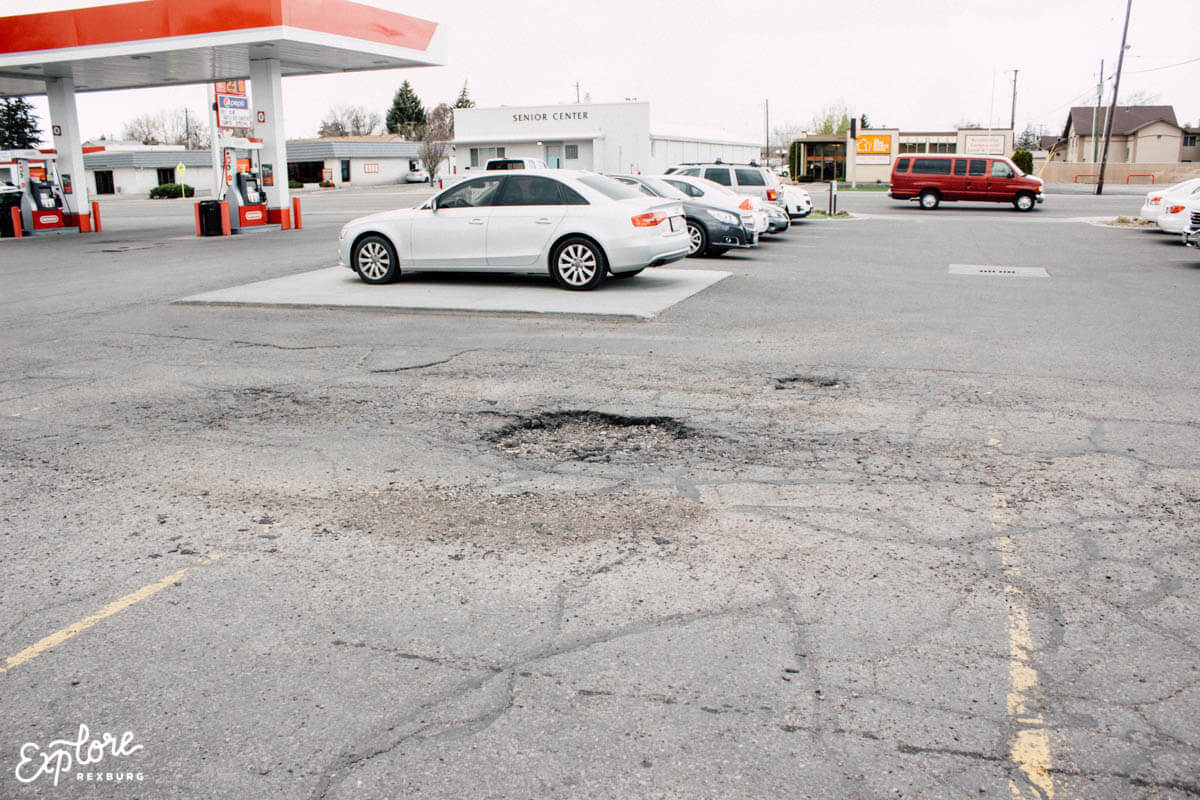 The parking lot area shared between Pizza Hut and Great Scott’s has two big potholes. You can’t miss these potholes unless you’re not paying attention. You might be eating a fresh slice of pizza, getting a sip of a Redneck Sup from Great Scott’s, or texting while driving. Whatever it is, it can wait! Would rather spend your money on delicious pizza or getting your car fixed because you drove straight into a pothole? Pizza. Exactly.

This area also has a bonus pothole. If you’re pulling out of the parking lot area onto Main Street (right next to Pizza Hut), you’ll drive over a nice pothole. The whole exit has a line of potholes. There’s one spot where you can avoid them, but you have to hit almost exactly. 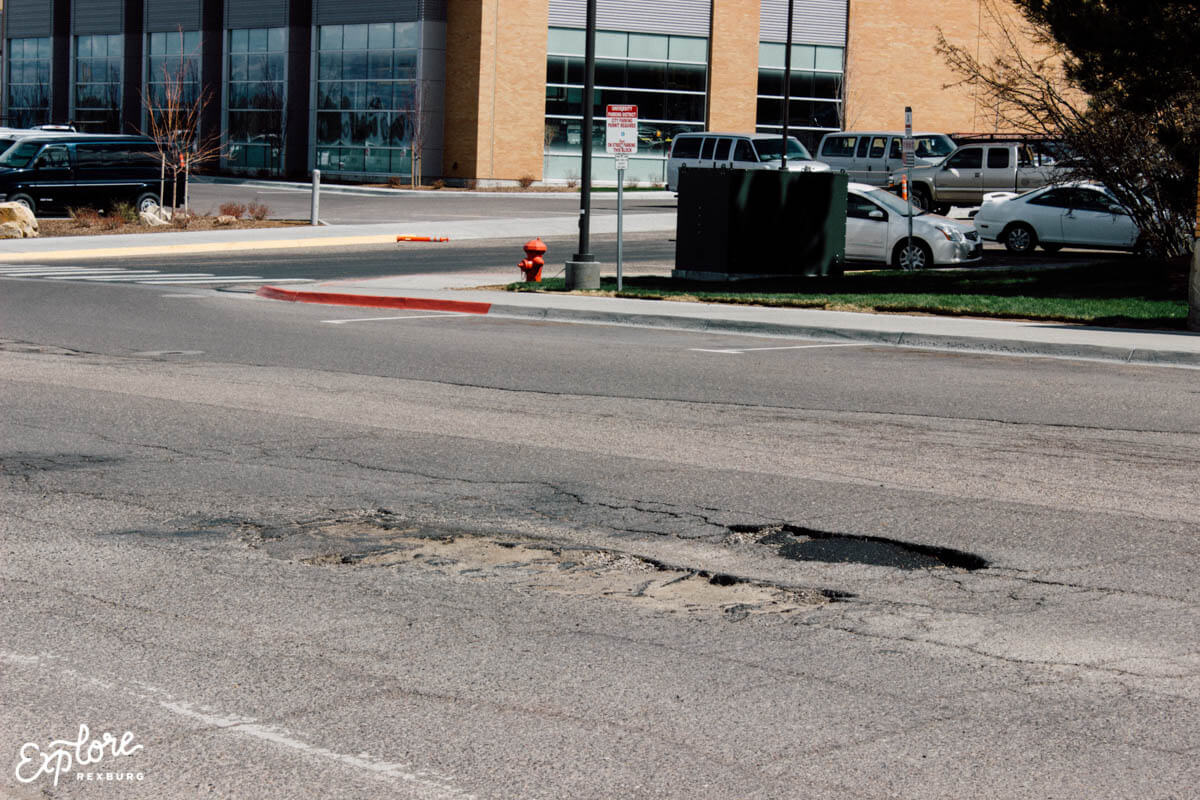 This next pothole is between the Somerset apartments and the BYU-I campus. It’s really two potholes forming into one. It’s no wonder everyone who lives at Somerset walks everywhere. If they even pull out of the parking lot they’re going to drive straight into two consecutive potholes! 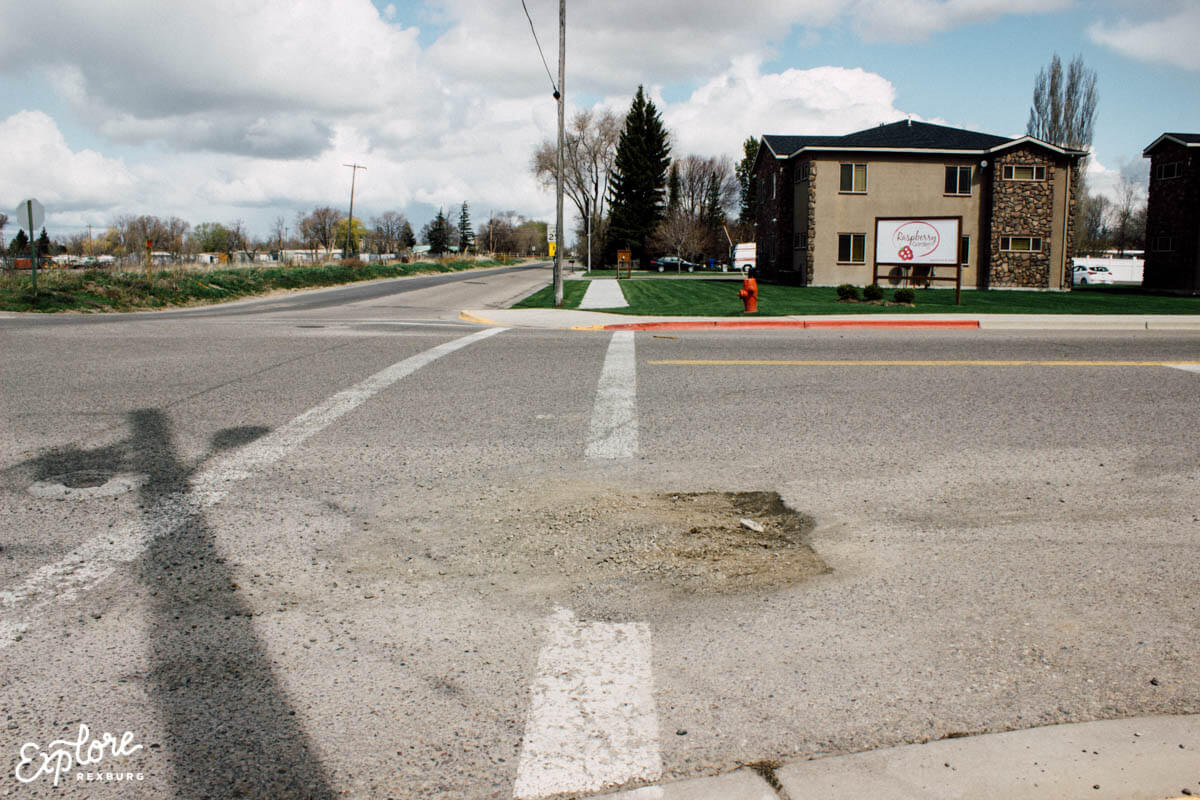 The next pothole on our list isn’t really a pothole, but it might as well be! It looks like someone was doing construction and cut a square out the road. They tried to fill it back in, but they missed the square. All the sand has piled up on the edge. If you drive over this, instead of going straight down, you go up and then down, making the impact even worse on your car. What’s up with that?

Behind Paul Mitchell on Mariah Ave. 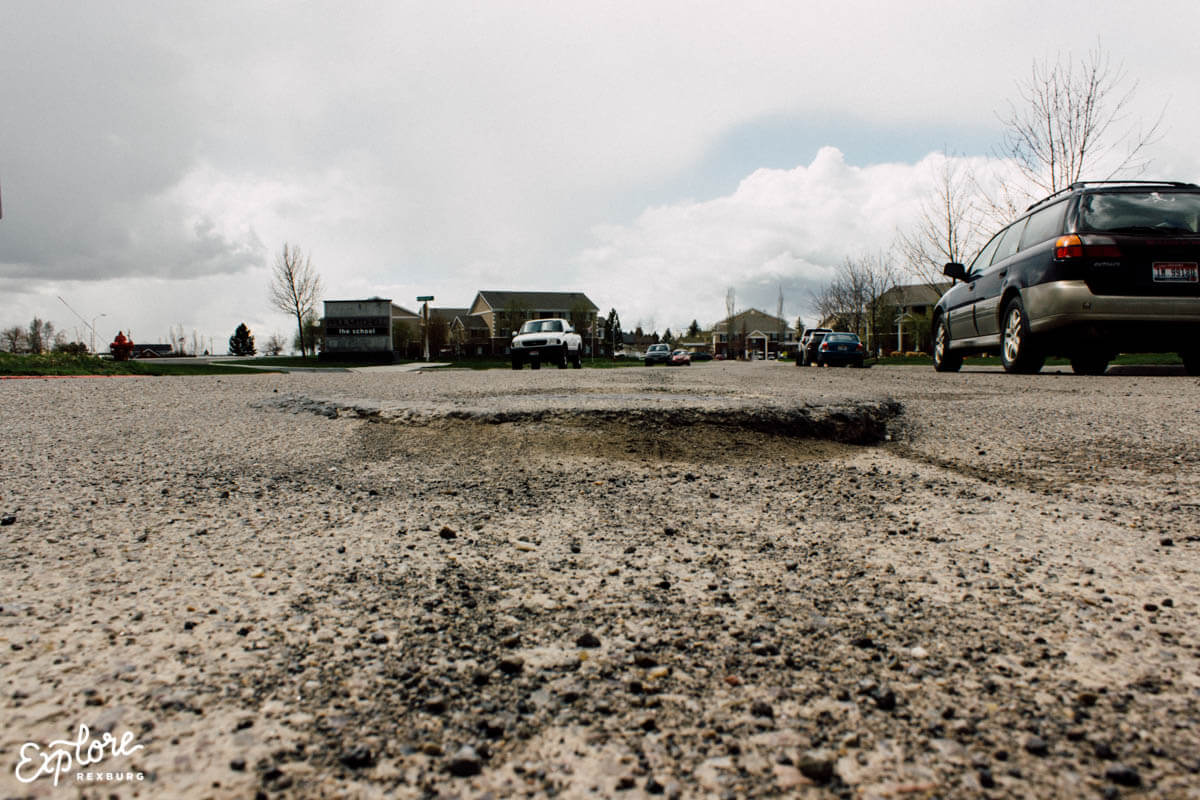 Here’s a reverse pothole. It’s a sewage drain that sticks up way more than the rest of the road. If you drive over this you’ll go into a little dip and then get launched in the air a second later. If you’re driving on this road make sure you go around the drain, not over it.

S 5th W on the way to Mesa Falls Apartments 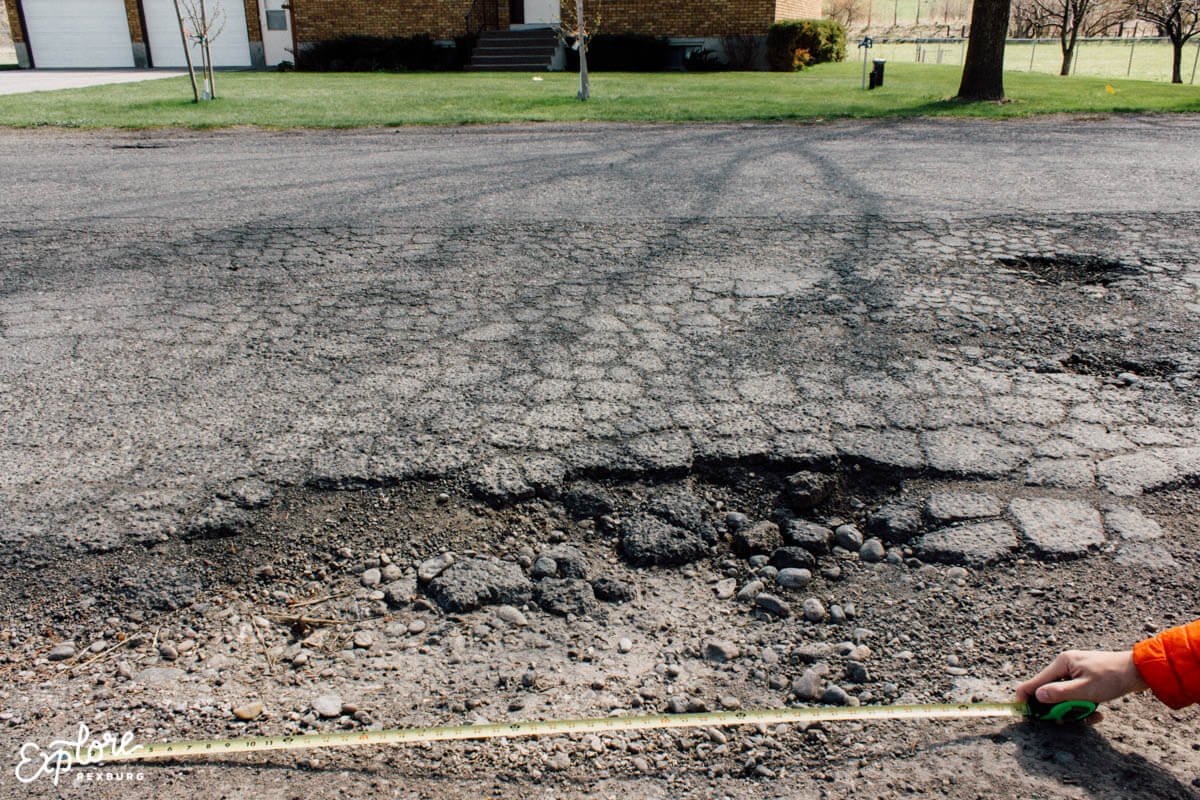 A terrible road in general, S 5th W could cover all the 10 worst potholes by itself. Close to where the Mesa Falls apartments are, there are a lot of small potholes. They’re not large or deep compared to some of the other potholes on our list, but because there’s so many right next to each other it makes this road just as bad to drive on. Let’s just say this road is minefield. Pretty much anywhere you step, or in this case drive, you’re going to take some damage. 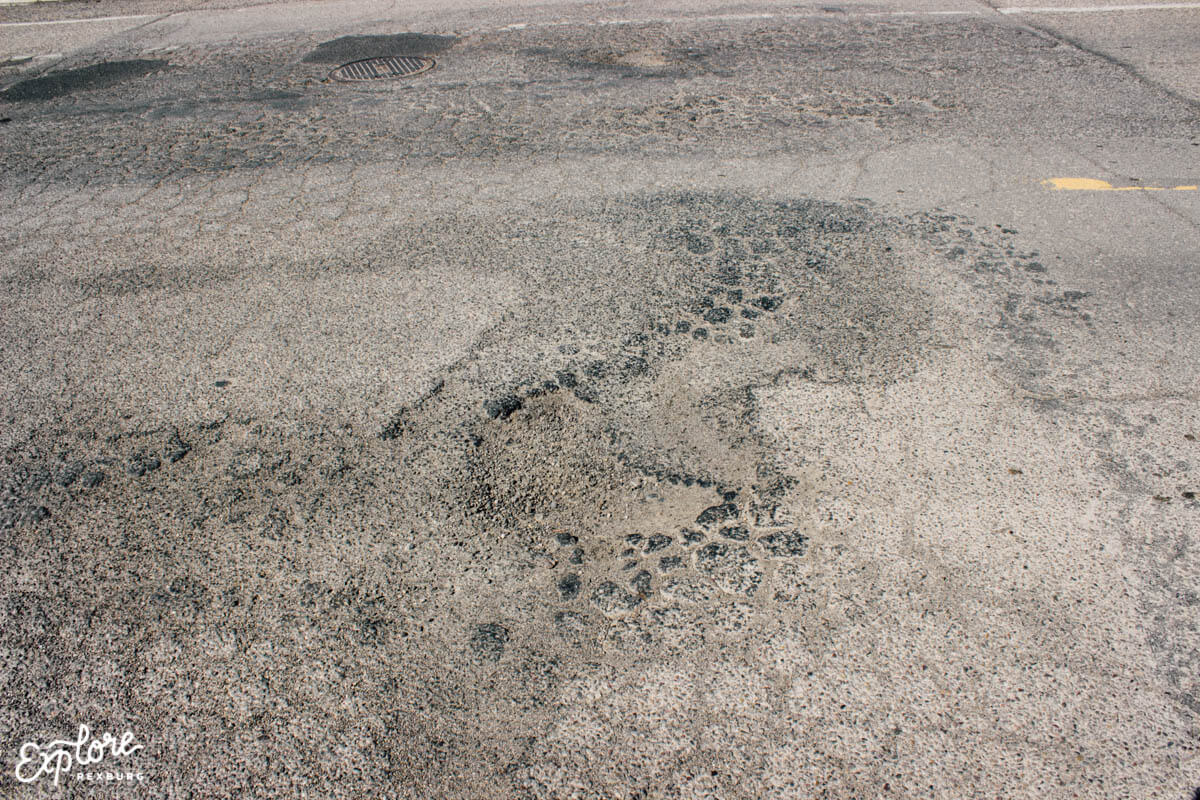 This part of 5th street isn’t as bad as next to Mesa Falls, but it’s got its fair share of potholes. These potholes are over by Merrill’s Landscaping. The worst one on this street is pulling into the Merrill’s Landscaping parking lot. You might notice the giant hole filled with water as you drive by. Don’t look for too long though. While you’re looking at this pothole, chances are you’ll hit one you’re not paying attention to. 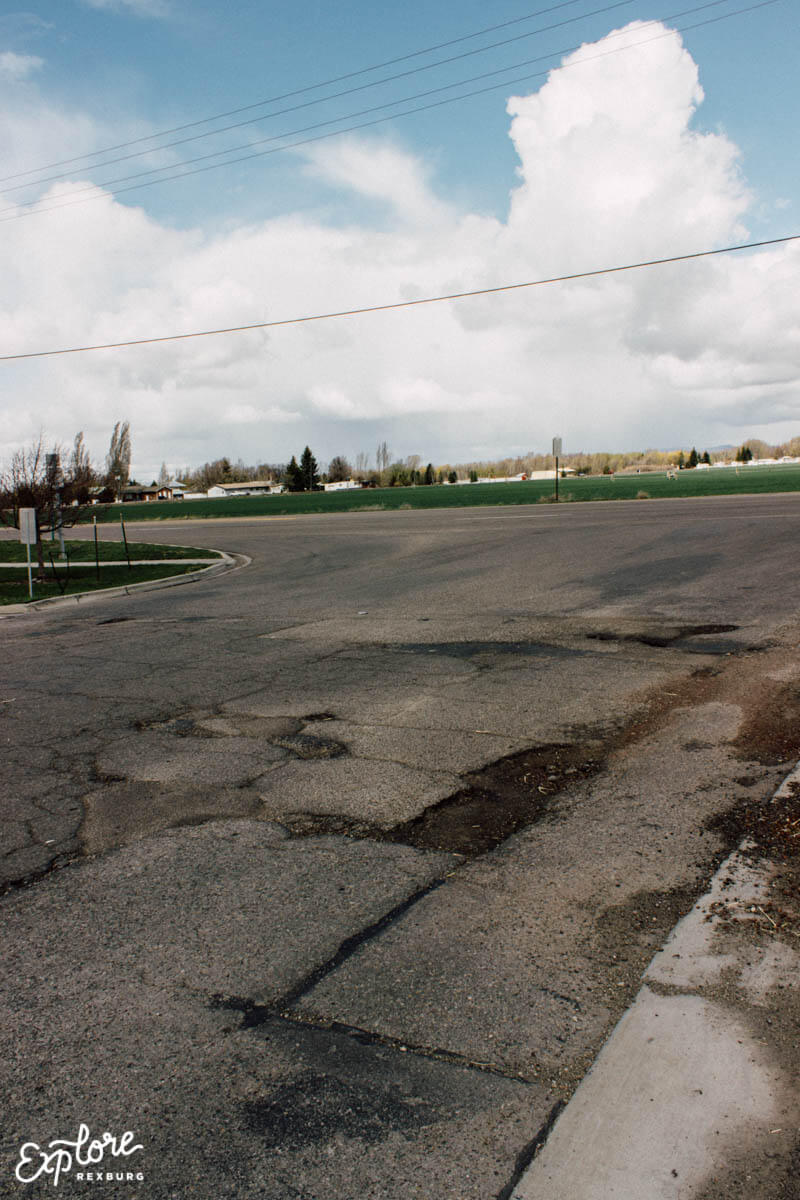 Over by the Valley Wide gas station we found this beauty. This pothole is right across the street from the gas station near the stop sign on Summit Drive. We know it’s not safe to drive on the other side of the road, but you might want to here. There’s no need to go all the way over, but get a safe distance away. 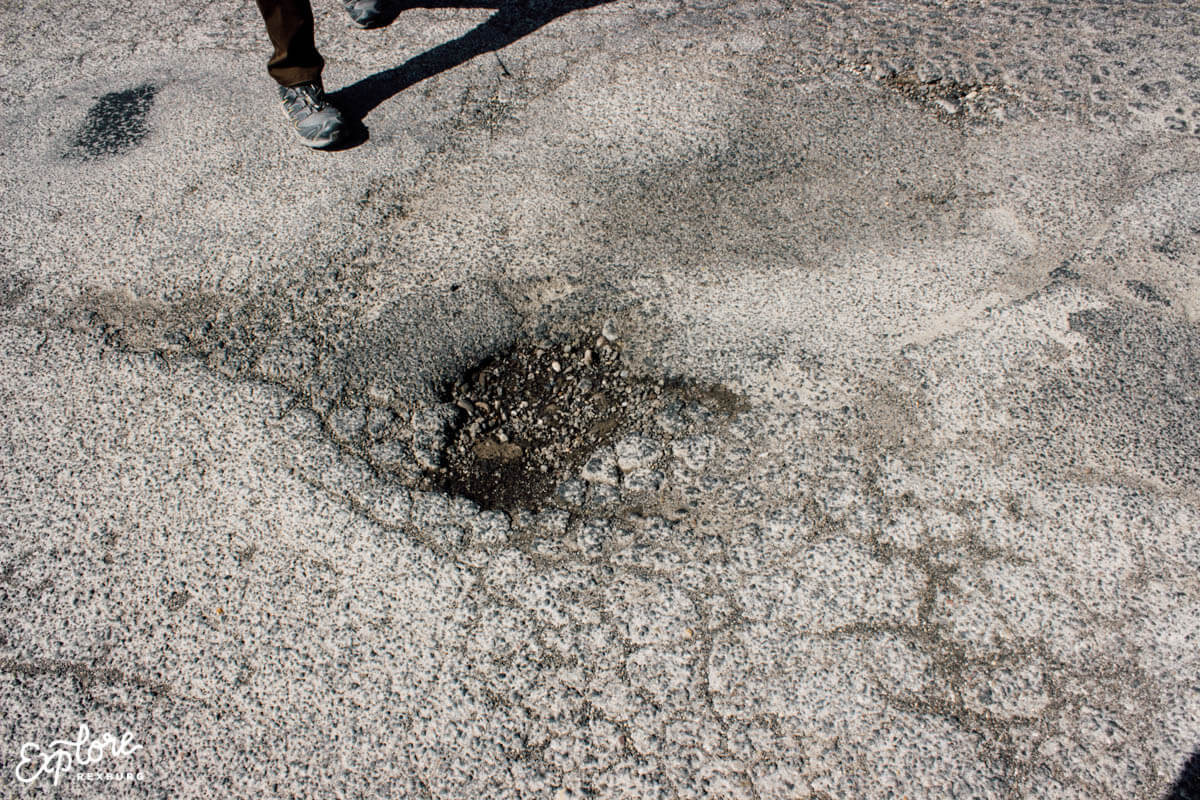 If you have an S permit for the Ricks parking lot, make sure you’re paying attention while you’re looking for a spot. If you’re not paying attention you could hit this pothole. People usually drive a little slower through these parking lots, so this pothole should be easy to see and avoid. If you’re a speedster it will be a little harder to spot. You would think the campus parking lots would be well taken care of. This pothole might be another way for the school to get you to spend money, although this time it won’t be going to them.

Center St. by the Upper Fields on Campus

As you turn onto Center Street and drive down by the Upper Fields, there’s a long line of small potholes, roughly 50 feet! We couldn’t take pictures of each one because there were so many, so we decided to take a video instead. We got a full 16 seconds of video! Keep your eyes on the road or you’ll get 16 seconds worth of damage done to your car. 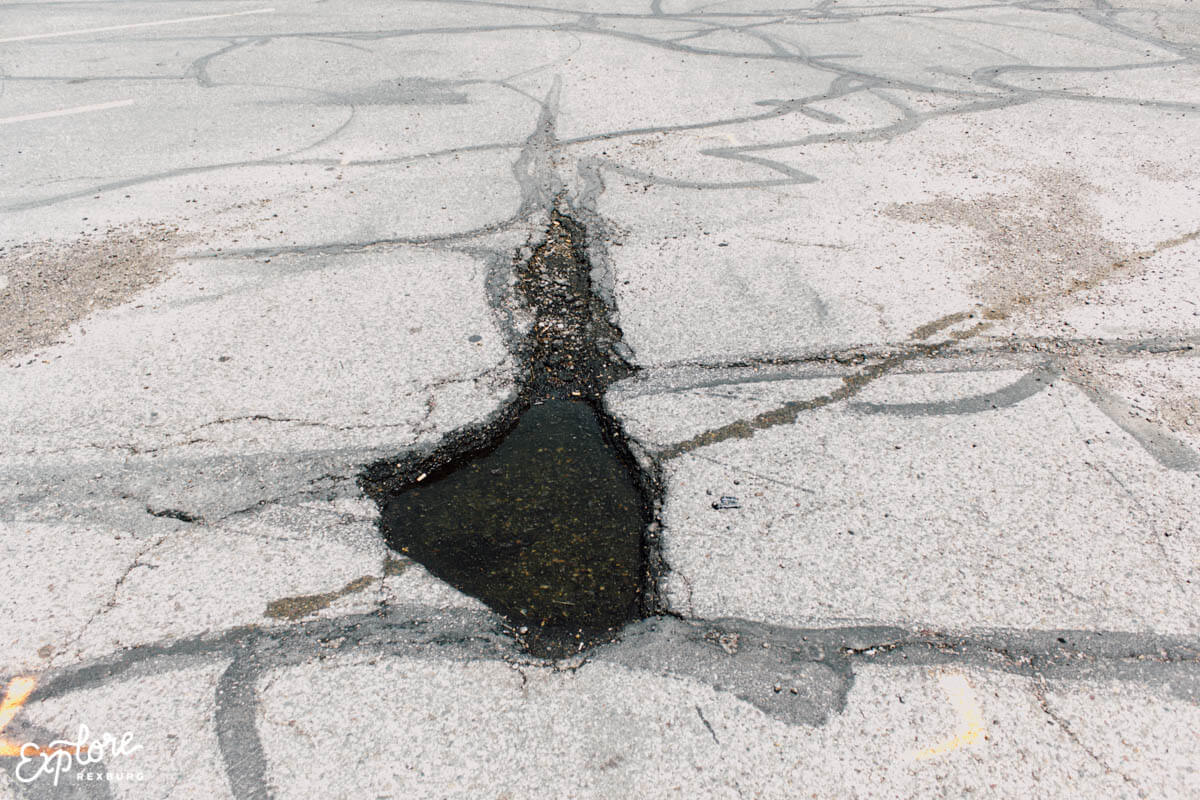 Right across from the Dollar Tree in the same parking lot area as McDonald’s, there is a deep pothole. This is by far the deepest pothole we found. Pay attention while you’re driving through this parking lot or you might get stuck. Seriously. If you drive a car that’s low to the ground, this pothole is going to cause some serious damage to the bottom of your car.

The most common forms of damage to a vehicle after hitting a pothole include:

Be safe out there Rexburg drivers. Those potholes are out there waiting to cause damage to your car. Make sure to always pay attention to the roads so you can avoid the potholes. We hope our list will help your wallet from taking a big hit.