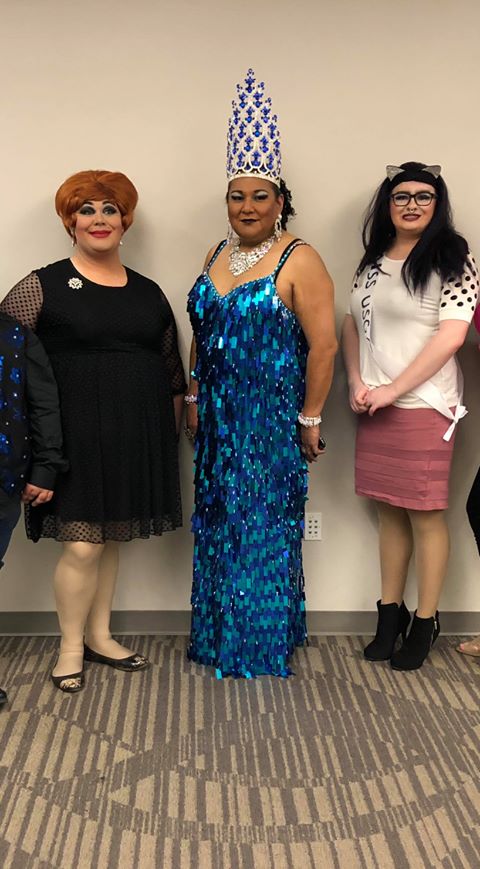 For the first time in Rexburg (that we’re aware of), the popular performance art in larger cities like New York City and Los Angeles made its way to our small town. The local chapter of USGA (Understanding Same-Gender Attraction) organized an event on March 22 at the Madison Library, to educate about “drag herstory” (history), culture and where it came from.

Afterward, we caught up with Jordan V. Rael, the event’s organizer and a performer under the name Alane Change (get it?) to talk about the event and what they hope to achieve in the future.

Thanks for doing this Jordan, or should I call you Alane?

*laughs* You can call me Jordan.

Cool. Talk to me about this show, Jordan. What made you want to organize something like this in Rexburg?

Drag Me To USGA was just about spreading awareness for USGA, which is the group for Understanding Same-Gender Attraction. Provo has one on their campus and we have one here. I was asked by the president of USGA to organize the drag night and once we had permission I just took the reigns from there.

We called it “Drag Me To USGA” because we really don’t have that many people that actually come to USGA, so we thought that was a funny little play on words. I shared the event to some of the community groups on Facebook and it was received well — it’s really not a scary thing, it’s just a form of performance art.

Do you think this will be just a one-time thing or do you want to do more events like this down the road?

We’re planning another drag night for next semester. We haven’t scheduled a date yet but we’re starting to plan it already because I want it to be bigger — more performers, more people. This time we wanted to focus on the history, or “herstory”, and in the future, we’ll do something else.

What is the history?

Drag has been going on since the dawn of time — either men wanting to dress as women or vice versa. It became more popular in the Shakespeare scene because women weren’t allowed to act on stage, so that’s where the actual term ‘drag’ comes from — men would wear these big hoop-skirts that would drag across the floor. And I’m pretty sure that if you had to wear those clothes it would be a drag.

Interesting. So how did it become what it is now? And why do you think people look at it as something taboo?

Well, a lot of famous people have incorporated drag into their art over the years — Robin Williams Barry Humphries, Julian Eltinge. I think drag is becoming more recognized as an art now, because we have things on TV, but then again that doesn’t encompass the scope of what drag can be. A lot of people here think it’s a weird, dark fetish and really it’s not — it’s too uncomfortable to get a kick out of it.

I think people put drag in a foreign box when it’s small because the LGBT community has embraced it and enjoys it so much. But people think it’s taboo because you have to go to these nightclubs or after-hours theaters to see drag. But it’s really not. When it’s presented on a broader platform, it suddenly becomes okay. Like Broadway has tons of drag in their main stage shows.

RuPaul’s drag race is very mainstream, but at the same time, that’s put drag in a box. People think you have to look and act like that in order to do drag, and that’s not true either. There are lots of sub-categories to drag and it encompasses a lot. 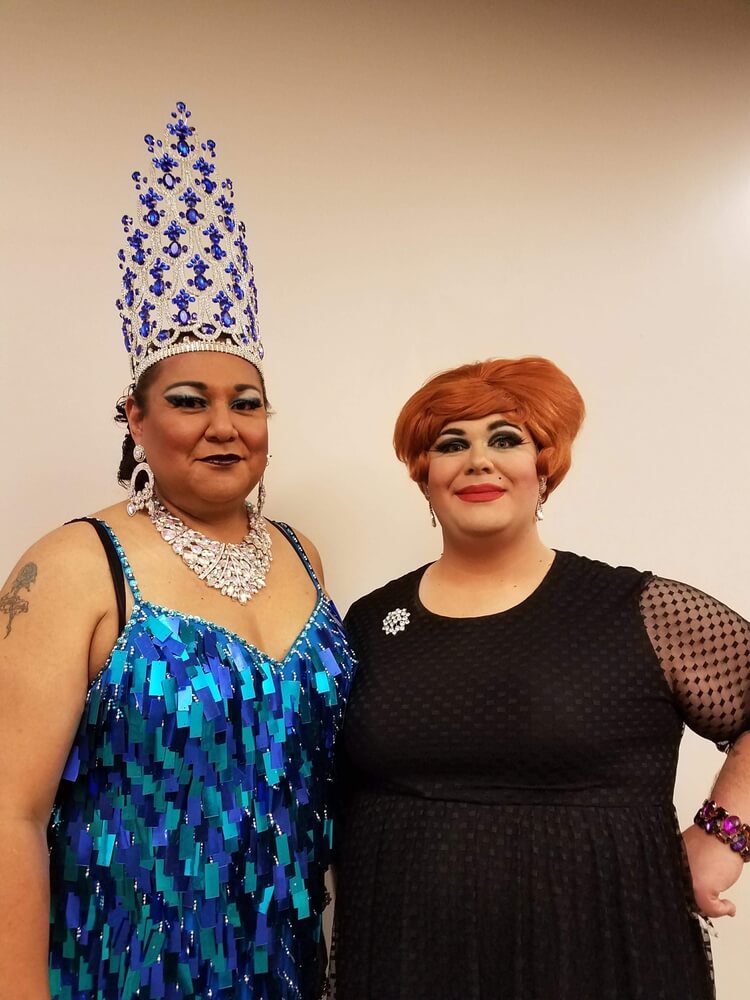 So what drew you to drag? How did you get involved in this?

I like to be rebellious and drag is a subculture that I feel like I fit into. I like punk rock and I think drag has its place in punk rock. I like being offensive and as Jordan, that’s different from my personality. I think of myself as a nice, chill guy but as Alane I can get in your face and be an activist. It’s like my armor.

I started doing drag about a year ago. I’m from Albuquerque, and originally from Texas, and there drag is okay — here not so much, but it’s getting there. I don’t want to say “closed-minded” ’cause that’s horrible to label anyone as that, but I just don’t think people here have been educated about it. The culture here blocks a lot from people, so they only see what they’re told to see.

For USGA I had to dial down to be PG, but when I go down to Pocatello and perform, I am nasty. I’m not trying to say I do anything horrible, but I do some stand-up comedy and yeah, it gets a little gross.

How did you construct the Alane character? What’s the name mean? How did you decide on the look and persona that you portray?

The name came just while I was out driving around. I was talking to a mentor of mine and she mentioned that I changed lanes a lot and it just kind of stuck. I thought it was a funny play on words and it’s not even that I’m a bad driver — it just stuck.

The character is very 60’s inspired — big hair, big lips, big everything. Think of like a housewife that’s bored and doesn’t have fun but takes on a super weird persona at night — that’s Alane — goofy, trashy, two tons of fun. They call her “Southeast Idaho’s premier Tupperware lady.”

Do you feel like performing in drag in southeast Idaho is difficult? Do people know how to act?

I don’t want to say people are rude but unless they’ve been exposed to drag before, they generally don’t know how to act, especially here. I feel safer performing in Pocatello — there’s somewhere for us to go, there’s a destination. Here I think there might still be a law that says it’s illegal for people to cross-dress in Rexburg.*

Is there a right way to act if someone hasn’t encountered a drag queen before?

There are some dos and don’ts — don’t touch me. It’s not a petting zoo and it takes a lot of money to look that cheap. I have like $150 of Sephora on my face, I don’t want it smeared in the first 15 minutes after arriving at my location.

As for what to say, I’m a man, I like being called a man. But I also believe that gender is a choice. If you want to be called something that you’re not born with, hey, that’s you. But for me personally, I’m a man and like being labeled as a man. I’m an openly bisexual member of the church and I’m a drag queen, but I’m also a very masculine man that likes to go duck hunting and fishing. When I’m dressed up as Alane you can call me she, he, or it; just don’t call me late to dinner.

But yes, just talk to us. Drag queens aren’t always catty like they’re portrayed on TV, we’re nice people with big hearts. We’re activists but we’re people too. Straight or LGBT, we’ll fight for anybody’s rights — just have an open mind and be entertained. 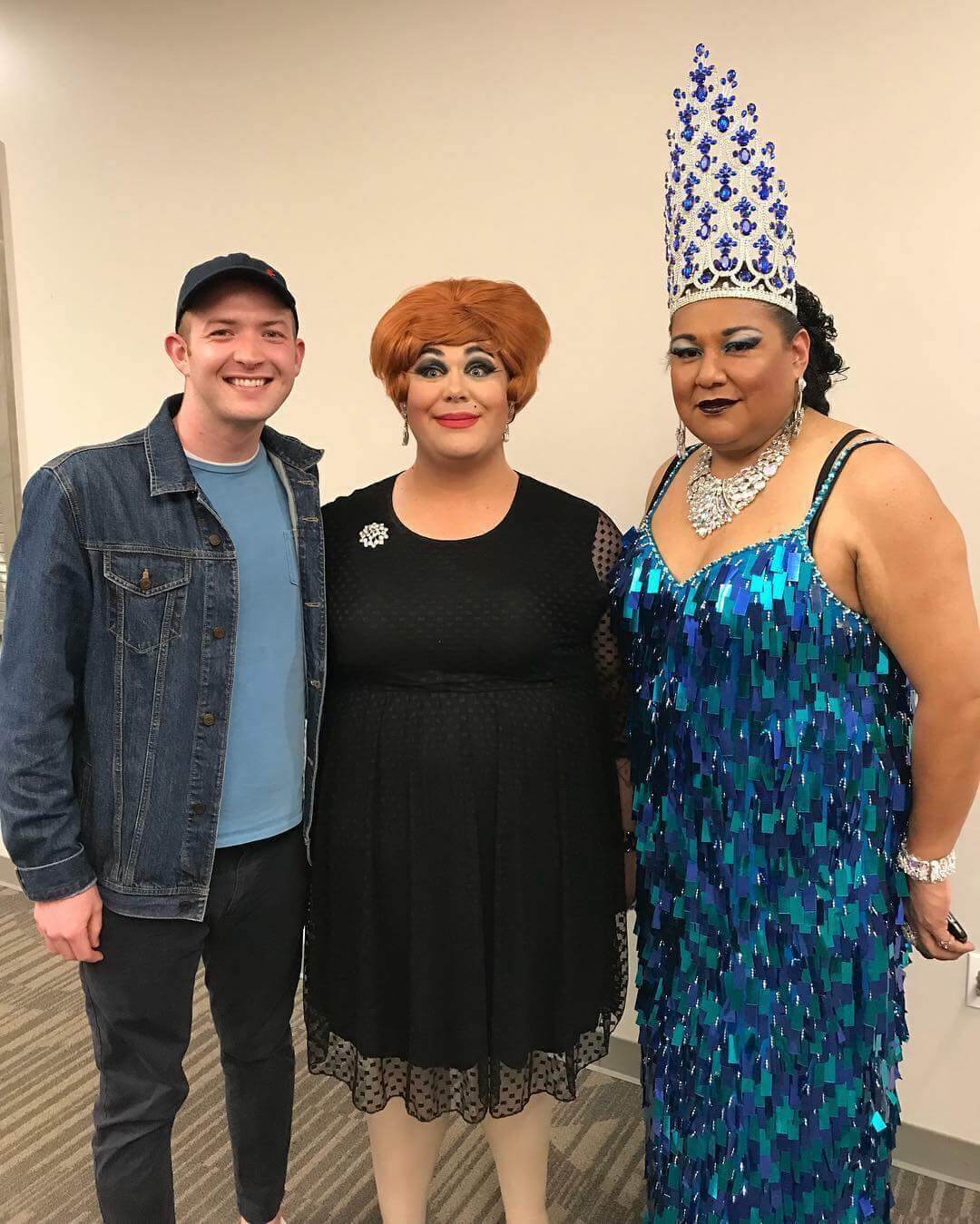 I want people to see that we’re people too. Drag isn’t a fetish, it’s just like being in a band — it’s my art — my performance. For me it’s just a character, it’s not someone I’m transitioning to become in the future. Heavens no, I don’t want to be Alane permanently.

Some drag queens don’t even perform, it’s just an Instagram account or they do makeup tutorials. If there was one thing I wanted people to take away from this, it’s don’t put drag in a box. It’s a performance art and that means people can make it whatever they want. RuPaul says, “We’re all born naked and the rest is drag.”

I’m not trying to do this to become a woman, or to live in women’s clothing. I’m just an actor on a stage and I hope people can see that.

*To the extent of our research, there is no city ordinance that proscribes cross-dressing as illegal.