Gather round, and have a seat. Let me tell you about the world’s best corn dogs.

The name of Rexburg’s singular corn dog truck is a classic example of padding, but it is also not wrong. Likely, there are more qualified corndog connoisseurs out there than me. But it is the opinion of this author that if you like corndogs, you will not be disappointed by World’s Best Corn Dogs.

This food truck does not hide its light under a bushel. Positioned as they are on Main Street right next to JB’s, they keep a high profile. The familiar yellow paint job acts as a siren call to those of us traversing the street between the hours of 11:00 a.m. and 3:00 p.m., and 5:00 p.m. and 8:00 p.m. 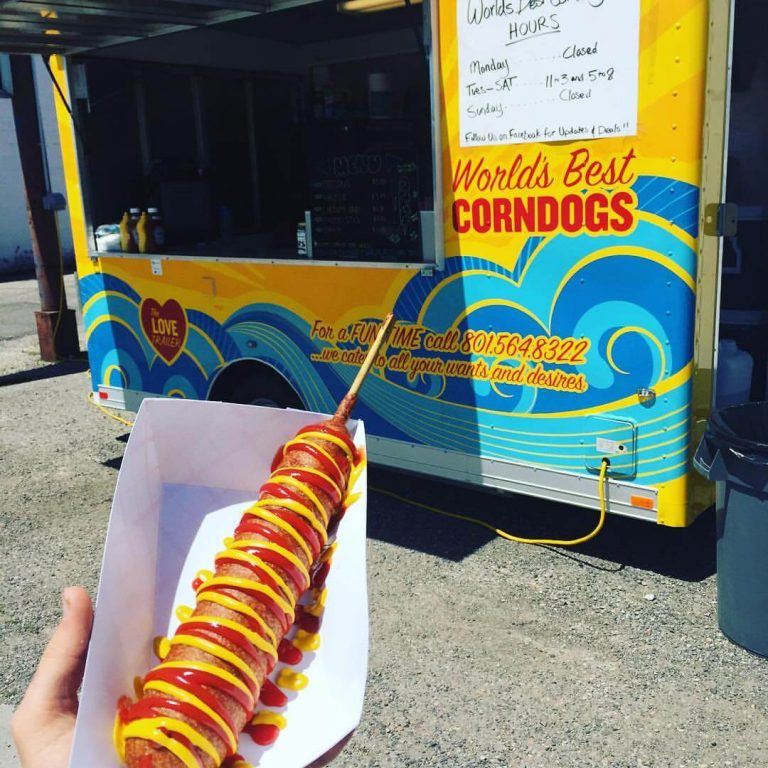 I was a late arrival to the game. I had always had my eye on World’s Best Corn Dogs, but I naively thought that there was no hurry to partake. It wasn’t until my wife drove me there out of the blue that I was finally made privy to Rexburg’s great gem.

The menu attracted me with its simplicity. With three scrumptious-looking offerings, the decision did not take long to make. You can get two different sizes of corn dog: the classic footlong for $5, and the Halfsie Classic for $3. My choice was clear. You’ll never know how much sense it makes until you take that first bite.

It wasn’t long before they called my name and I approached the trailer to retrieve my Classic Footlong. And then, something that had never happened to me before. They asked if I wanted honey on it.

Honey? On a corn dog? Now I’m all about a good food mashup. And it wasn’t like it sounded odd…it just had never occurred to me before to do that. So to be safe, I got some on the side for dipping.

Three different things happened inside of me that day. First, I took a bite of my classic foot long and immediately knew I had been missing out. The ketchup, mustard, batter and dog blended as seamlessly as a string quartet. Second, I tried the honey. Friends, have honey with your corn dog. You’ll never know how much sense it makes until you take that first bite.

The final thing that happened to me was the urge to spread the news. Every time it came up (often by me) I would spread the news. The World’s Best Corn Dogs are here in Rexburg. It’s time that everybody knew.

If you haven’t yet stopped in at this humble trailer on Main Street, there is still time. They are a seasonal establishment; April through October are their typical run months.

Don’t let this opportunity pass you by. The Rexburg winters are cold, harsh, and long, and even more so without the company of the bright yellow corn dog trailer on Main. Stop in today for a quick lunch or snack. It’s the world’s best.