Anyone who lives in Rexburg knows that jaywalking is nothing less than a victimless crime. With signs posted in several locations around town enforcing the $76.50 fine if caught jaywalking, most students try to use the crosswalks as much as possible.

On occasion, students get caught jaywalking. However,  on one particular night this past October several jaywalkers paid the price. There are four crosswalks at the intersection of South 1st West and West 2nd South. With this intersection arguably being one of the busiest in Rexburg, it tends to get a lot of student traffic.

The madness began around 8:00 p.m. on October 1, 2018. A local Rexburg police officer decided to park his cruiser right next to this major intersection to see if he could catch any students jaywalking. Sure enough, within minutes of him sitting there a student jaywalked. The officer immediately turned on his lights and pulled the student over. After he was finished issuing that citation he returned to his original location and continued to look for perpetrators. Each time he returned to his post, he continued to catch more and more students jaywalking.

Soon, curiosity arose. Several residents from the surrounding apartment complexes began to come outside to see what all the commotion was about. Within minutes there were 100+ students standing outside their apartment complexes watching the diligent officer work to ensure a safer intersection.

As more students continued to watch the chase of catching jaywalkers they got even more involved. There were students narrating what was happening via mega phone, music was playing, and students were yelling and clapping. After about an hour of this the officer proceeded to pull his cruiser into the middle of the intersection, step out, and take a bow in front of all the spectators who had gathered to watch. The crowd erupted in a chorus of cheers. 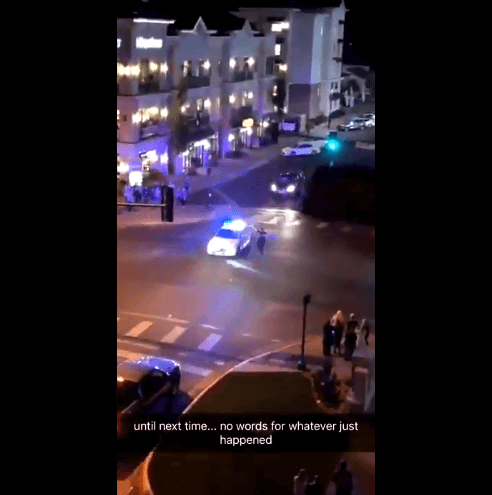 The following day the event received a shout out on the popular site www.barstoolsports.com. The headline read, “Watching Cops Pull Over Jaywalkers Brought a City Together and a Tear to my Eye.” The article contained a variety of videos that were taken at the scene in addition to some of their own commentary on what happened.

In an odd way this actually brought our small town together. As unfortunate as it is for the students who were caught and issued a citation, everyone else who was watching will remember this event for years to come.